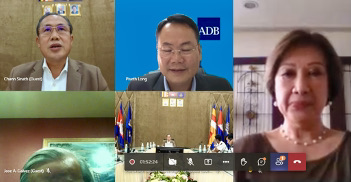 PRIMEX has successfully completed its five-year contract with Cambodia’s Ministry of Water Resources and Meteorology (MOWRAM) for the provision of Project Management and Implementation Consulting (PMIC) Services for the Uplands Irrigation and Water Resources Management Sector Project (UIWRMSP). The Asian Development Bank (ADB) funded the US$60.11 million loan, which ran from 2016 to 2021.

The project aimed to increase agricultural production by rehabilitating, modernizing, and climate-proofing selected irrigation systems in Kampong Thom and Battambang provinces. The project also built the capacity of the farmer water user communities (FWUCs) in the subproject provinces (Battambang and Kampong Thom) so that they can operate and manage the improved irrigation systems better.

The PRIMEX-led consultant team supported the Project Management Unit (PMU) in the day-to-day management of project implementation, including the preparation of operation and maintenance (O&M) manuals and procedures, as well as the detailed design of the non-core subprojects.

The Memorandum of Understanding (MOU) of the final ADB Review Mission, held from 26-31 August 2021, stated that, “The mission is very pleased with the successful implementation of the project–from start to finish, which has resulted in the achievement of outcome and output performance targets without the need for any time extension.”

At the wrap-up meeting of the said mission, His Excellency Chann Sinath, MOWRAM Under Secretary of State and Project Director, thanked the PRIMEX Team for their excellent performance, in many instances, beyond their terms of reference. He also expressed his appreciation to the PRIMEX Project Director, Ms. Elvira Ablaza, for her full and active engagement and support throughout the project implementation period.

In response, Ms. Ablaza congratulated HE Chann Sinath on the successful completion of the project, which, she said, “could be attributed to several factors, foremost among which is the full and active involvement of the Project Director, as well as his hands-on management style, which kept everyone on their toes and served to inspire and motivate all PMU and PDWRAM staff, as well as the PMIC specialists and contractors’ personnel, to work hard, do their best, and collaborate with each other to meet project targets.”

Mr. Raza Farrukh, the ADB Project Officer who led the preparation of the project and managed it during the inception phase, before it was turned over to the Cambodia Resident Mission in 2016, also lauded PRIMEX’s dedication.

PRIMEX implementation, supervision, and management support had been great. This project could be presented as an example of quality design, effective and efficient implementation, and great teamwork of all stakeholders including ADB, the executing agency and government counterparts, and the consultant team.

Ms. Ablaza was highly elated about the outcome of this project and expressed her sincere thanks and appreciation to the PRIMEX-OCG-CADTIS consultants led by Dr. Jose A. Galvez, Team Leader and Mr. Ung Kotaro, Deputy Team Leader, for their hard work and commitment to the project objectives.

She added, “This project was the first collaboration between PRIMEX and OCG and was followed closely by the JICA-funded Southwest Phnom Penh Irrigation and Drainage Project. I still remember our back-to-back contract negotiations in Phnom Penh for these two projects in February 2016. It was a highly memorable experience that will be hard to replicate.”