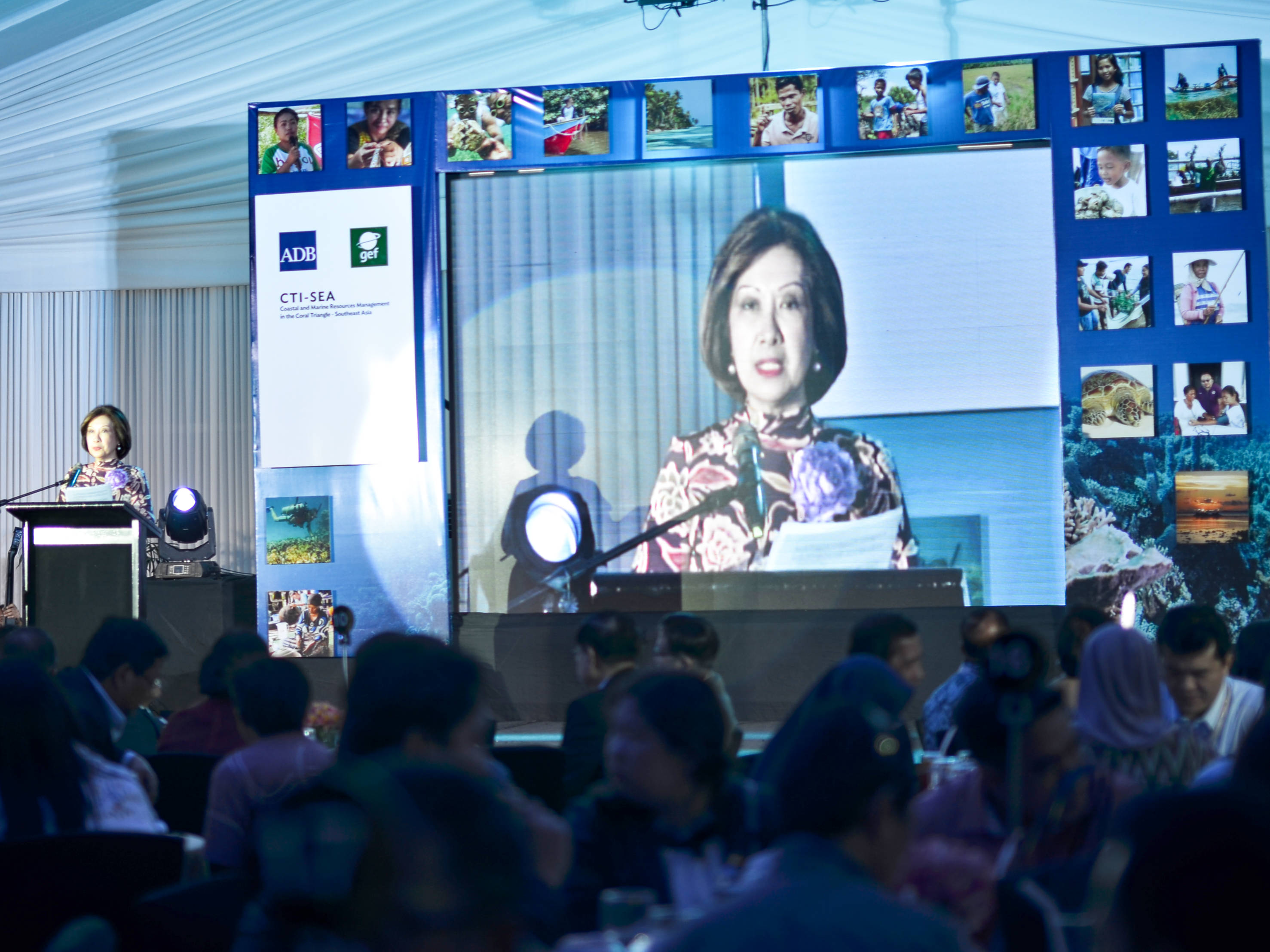 PRIMEX President and CEO and RETA 7813 Project Director, Ms. Elvira C. Ablaza, expressed her gratitude to the development partners, the Coral Triangle Initiative (CTI ) Regional Secretariat, and the local governments and community partners of the project who joined the closing ceremony at Dusit Thani on 28 November 2017.

“Tonight, more than eight years since the signing of the CTI Declaration in May 2009 in Manado, Indonesia and five years and four months since we mobilized our Consultant Team on 12 August 2012, we are here to celebrate our achievements and the strong bonds of partnership and friendship that we have forged with various entities, groups, and individuals across our project sites scattered along the Sulu-Sulawesi marine ecoregion,” said Ms. Elvira C. Ablaza, PRIMEX President and CEO.

“This project has been quite a journey for our team – and for our partners at the local level, where most of the action has taken place. We are proud of what we (our team and everyone whom we worked with and supported in the last five years) have accomplished, both big and small. We are confident that the seeds that we have planted among the local communities, especially the youth, will grow and bear fruit through the efforts of those whom we have mentored and trained under this project.”

RETA 7813 documented the project’s achievements through various knowledge products that were shared with participants. The project also shared five short videos on ground level achievements of partners, which was the highlight of the closing dinner.

Lastly, the Philippine partners inspired the audience with their efforts in tapping unexpected partners as environmental advocates and transforming students to become heroes to protect coastal and marine resources.

RETA 7813 Team Leader and PRIMEX Executive Vice President Mr. Guillermo L. Morales also shared three key lessons gained from the project. “The first is to be open to working with non-traditional partners. We have mothers, home-makers, crafters, elementary school teachers, high school students, business owners, and former law offenders, as partners. They are not the usual partners for projects like these, but we cannot contest the value they have contributed to the project.

The second is to listen to the local community’s definition of success. This can be a bit different compared with the funders’ definition, but they are as meaningful. For instance, in our solid waste and verticulture program in Indonesia, a farmer measured success not by the amount of money he earned, but by how people’s behaviors have changed towards waste and garbage.

The third is to let your partners design their own local activities. In our experience, people can make informed decisions and create solutions themselves,” Morales said.

Earlier on the same day, RETA 7813 invited about 40 local partners to a knowledge sharing workshop to share their own lessons and the steps they have taken to sustain the project’s initiatives. Mayor Romy L. Salvame of Taytay, Palawan and Mr. Sapdin Ibrahim, District Officer of Kudat, Sabah, were among the participants who voiced their support to continue what was started under the project.