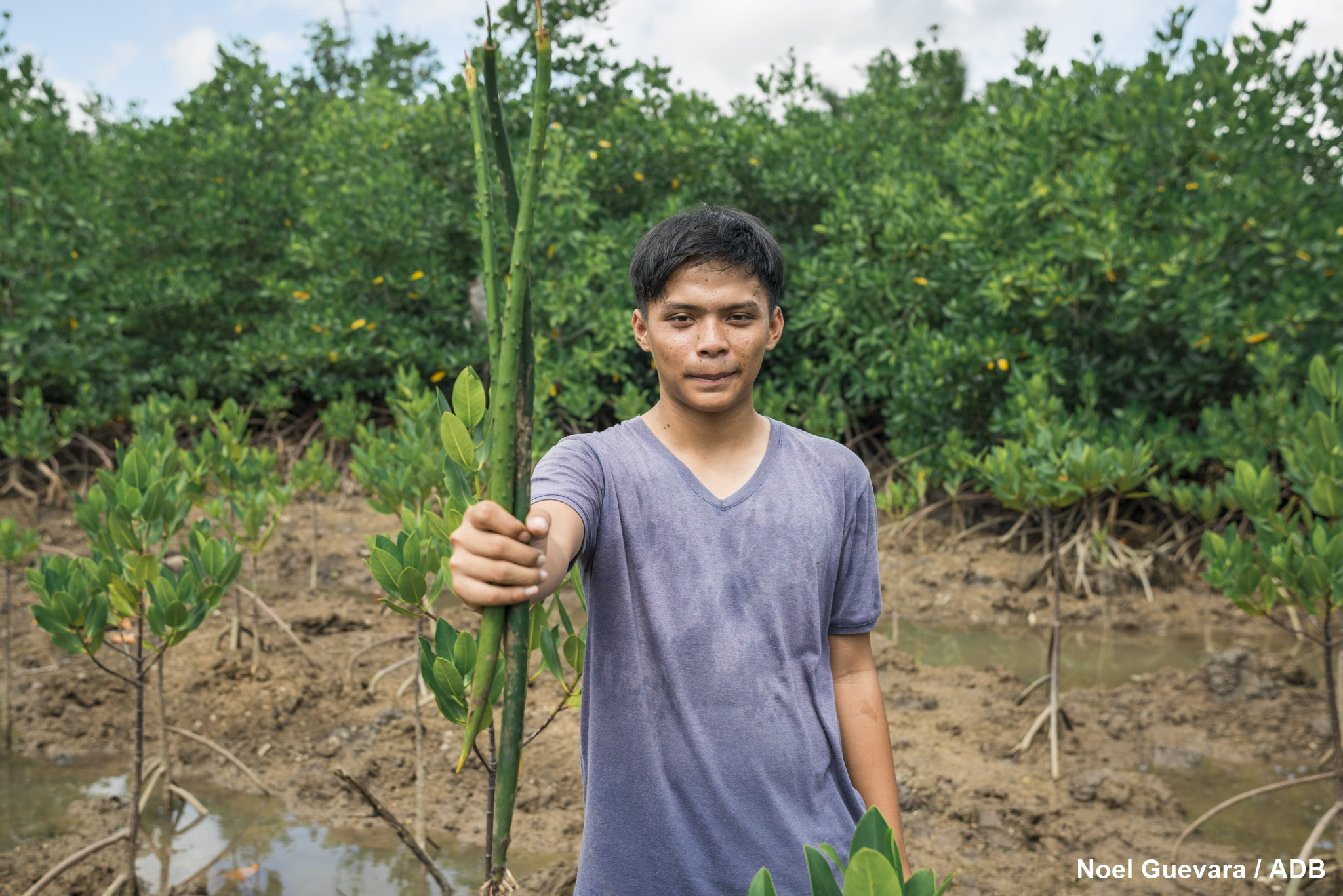 The forum aimed to build the youth’s leadership and empower them as partners in achieving the Sustainable Development Goals (SDGs). More than 170 delegates from over 30 counties attended the two-day event, which was held back-to-back with ADB’s 50th Annual Meeting of the Board of Governors.

Youth for Asia showcased the school’s project through a short video that they produced with CTI-SEA. It told the story of how a group of students from Central Taytay NHS succeeded in reforesting Sitio Quilala, a denuded area in the municipality of Taytay in northern Palawan province, Philippines, by planting more than 18,000 mangrove propagules from August 2014 to February 2016.

They carried out this project as part of CTI-SEA’s Heroes of the Environment campaign. Through the dedication of students and teachers, their partnerships with the local government, and mentoring from CTI-SEA, they achieved a survival rate of about 80-85%.

Mercado was grateful for the chance to share their learning and to network with fellow environment advocates.

“We never thought that our effort, commitment, and willingness to work in mangrove reforestation during the past years will end up in this bright and fruitful situation. CTI-SEA is the only project that totally trusted our school in implementing the project. We stand with confidence because this was a labor of love.”

Valones, on the other hand, called on her peers to rise to the challenge of proactively caring for nature.

“Youth should be at the forefront of protecting the environment because we are a force to reckon with. By tapping each other’s core strengths, we can all protect Mother Nature,” she said.

Zahin Hussain, Partnerships Manager – Youth for Asia, which is under ADB’s NGO & Civil Society Center, thanked CTI-SEA for its full support to the forum. “The delegates supported by CTI added unique perspectives to the conversations and enhanced the inputs for ADB’s projects. The video showcasing the CTI project was a big hit – especially the jingle!”

Aside from Valones and Mercado, CTI-SEA also funded the participation of five delegates nominated by the National Coordinating Committees of Indonesia and Malaysia and the Regional Secretariat of the Coral Triangle Initiative on Coral Reefs, Fisheries, and Food Security (CTI-CFF).

Among them were Imam Fitrianto (Head of the Cooperation Sub-Division, Directorate General of Marine Spatial Management) and Nisaul Makmudah (staff from the Public Relations and Services Division, Secretariat of the Directorate General of Marine Spatial Management), both from the Ministry of Marine Affairs and Fisheries (MMAF) of Indonesia; Mohd Safuan Che Din, a graduate student from Universiti Malaysia Terengganu and Marni Rahman, Knowledge Management Specialist working as part of the National Secretariat in Malaysia;  and Alvin Pahlevi from the CTI-CFF Regional Secretariat.

PRIMEX has been active in promoting innovative youth engagement activities within the CTI-SEA project. Last September, the project launched the Tales from the Coral Triangle-Philippines, a collection of 10 stories written by high school students from Palawan, Philippines at the ADB Headquarters in Manila.

Guillermo L. Morales, PRIMEX Executive Vice President, is the Team Leader of CTI-SEA. It is a five-year (2012-2017) technical assistance to Indonesia, Malaysia, and the Philippines funded by ADB and the Global Environment Facility (GEF). It works in building the capacity of those living in coastal communities by providing them with the resources, knowledge, and skills to protect the Coral Triangle.